A digital analysis tool that screens for manufacturing defects with the potential to guide changes to commercial cell manufacturing processes longer term, be used as a quality assurance/quality control tool in a gigafactory.

Most rechargeable cylindrical cells use the “jelly roll” design, where a thin layer of anode material, separator and cathode material are layered on top of each other and then rolled up – much like a Swiss roll – and inserted into a hollow cylindrical casing. Whilst the reduction in a cell’s performance over a battery’s lifetime is widely studied, the shape and structure of the battery cells’ jelly roll assembly have traditionally not been considered as a factor. UCL researchers have observed the opposite; performance reduction accelerates when the jelly roll is deforming. 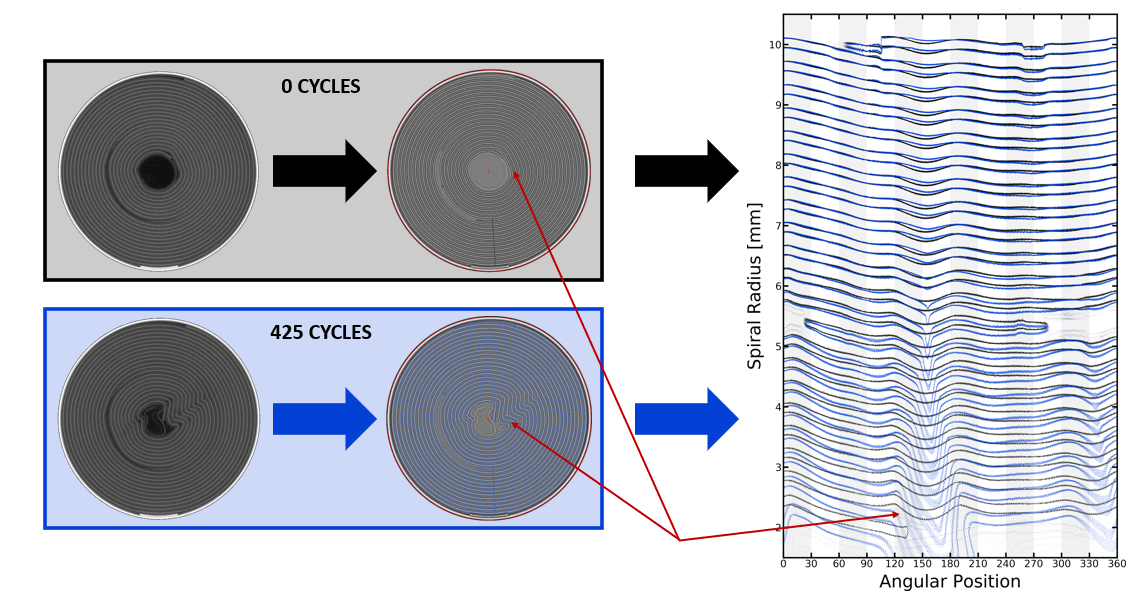 The initial manufacturing imperfections (marked in red) are visible before any cycling has taken place (black). By 425 cycles (blue) these imperfections have developed into major jelly roll failures.

The quality control tests in place by commercial cell manufacturers focus on electrochemical performance. While these are valuable metrics, they entirely overlook structural defects that can develop over several hundred battery charge/discharge cycles. Every cell contains these initial structural imperfections to some degree, and eventually through normal use and aging, they grow and reduce the cell’s ability to hold charge. The challenge is to derive a metric and quality control process that cell manufacturers could use in a volume production environment that could additionally test their cells for structural integrity, reducing the possibility of below-standard cells being deployed in EVs.

Researchers at UCL working on the Faraday Institution’s Multi-scale Modelling project have demonstrated at lab scale that the pre-cycling quality of the jelly roll is an excellent indicator of the duration of the cell’s first life (typically, the number of cycles before it can only hold 80% of its initial charge). Cells with near perfect assemblies do not experience a significant reduction in the ability to hold charge until greater than 1,000 cycles, whereas cells with large initial internal defects may begin to physically degrade after 300 cycles or less. The digital fingerprinting technique identifies the size of initial structural defects using X-ray computed tomography (CT), a non-destructive technique similar to that used in medical applications. A quality index is assigned to the cell in an automated process.

To date, X-ray CT has not been widely applied for routine, large scale manufacturing quality control due to long imaging times. However, the fingerprinting process developed by UCL researchers can be performed on scans that have been acquired in as little as five seconds, putting the technique in the same time scale as cell manufacturing, and opening pathways for in-line characterisation and quality control.

3D X-ray imaging has been widely applied in scientific investigations of Li-ion batteries, but previous limits in throughput of the technique has limited its application in manufacturing environments to batch inspection. Moreover, the influence of cell architecture has been overlooked as a signature of cell degradation. We are excited to bring new advanced measurement techniques to the manufacturing environment, that can also serve as an indicator of long-term cell performance. With the battery manufacturing boom expected in the next decade, we are working towards an X-ray CT digital fingerprinting system that could be applied in the UK’s first gigafactory.”

In the near term, use of the technology in an off-line environment could guide changes to commercial cell manufacturing processes that could give rise to significant improvements in cell integrity. Promising early results using the imaging technique lead researchers to believe that if one particular cell manufacturer were to redesign the placement of certain internal components of the cell it could mitigate premature degradation, in the most extreme cases doubling the cell’s lifetime. Such improvements in cell performance and predictability could be passed on to consumers in the form of longer warranties and reduced likelihood of defective battery packs that need warranty replacement.

In the long term, developing this technique further for production environments in a gigafactory would provide a means for continuous improvement in cell manufacture. This could enable higher throughput and lower waste while providing a higher quality product to consumers.

Researchers are rapidly exploring avenues to commercialisation and are currently using the technique to advise automakers as they assess commercial cells for possible use in new battery designs.